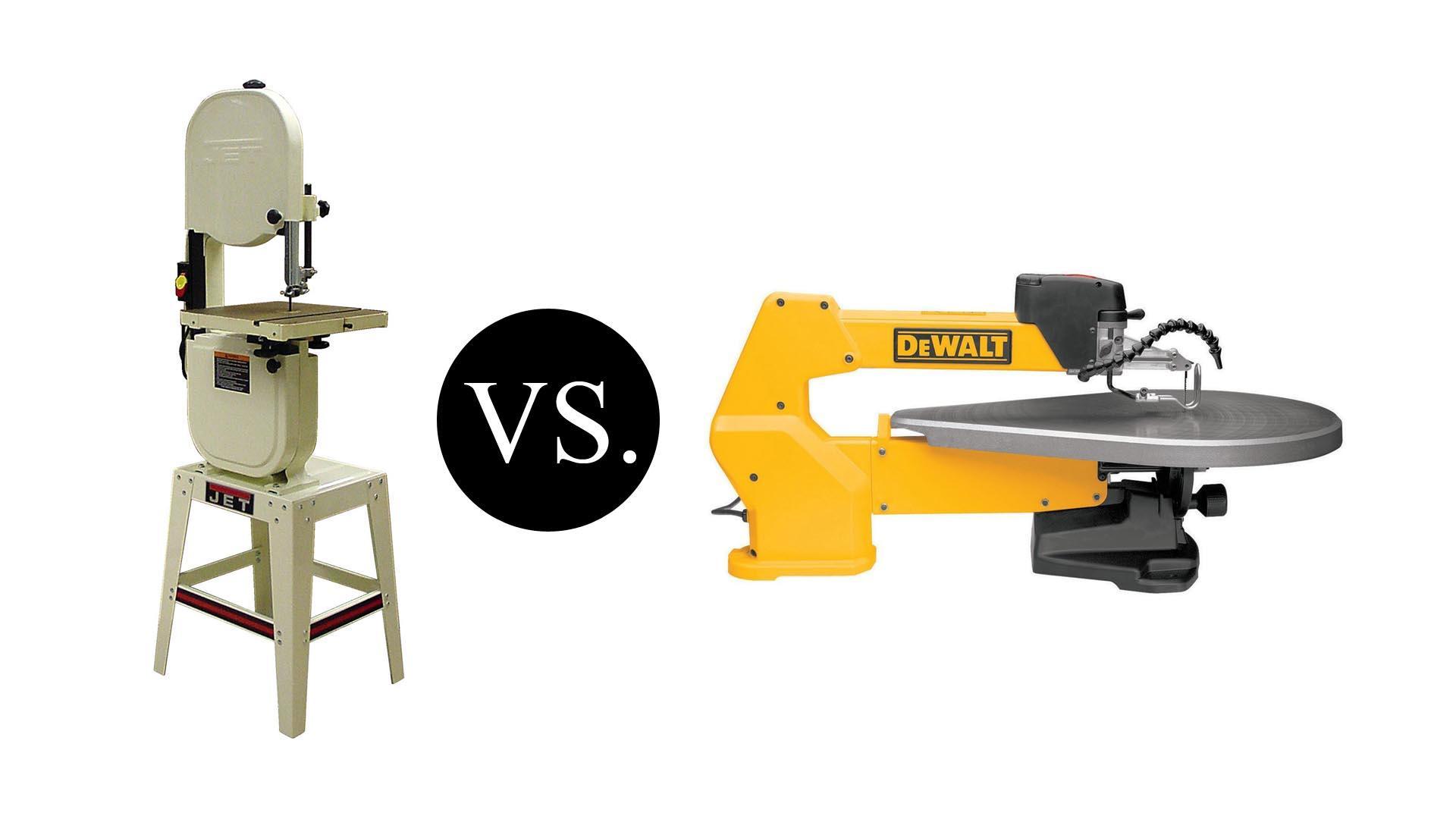 Scroll saw vs Band Saw: Which Should You Buy?

Although both tools are made to cut curves, each serves a more specific purpose. Before you can decide between them, you should know what kind of work you'd like to do. Will you use your new saw to cut intricately-detailed pieces like ornaments or puzzles? Or, would you like to make bigger projects like arched moldings or curved furniture? If you have a project in mind, the decision between bandsaw and scroll saw is easy.

Advantages of a Scroll Saw

For tight curves on projects like artwork, clocks, and puzzles, nothing beats the scroll saw. This tool excels at cutting arcs as small as the head of a pin. The scroll saw's narrow blade also produces a thin kerf that allows pieces to fit back together almost as if they were never cut apart. That might not sound useful, but it's exactly what you need to do to make something like a jigsaw puzzle. It's also a great technique for producing marquetry and inlays.

Another reason to choose a scroll saw vs band saw is that it can make cutouts in the middle of a part. For example, imagine that you'd like to cut a large ring out of a piece of plywood to make a clock. It would be impossible to make the inside cut out with a bandsaw because you'd have to cut right through the ring itself. With a scroll saw, you can detach the blade at one end, drill a hole through the inside of the ring, insert the blade through that hole and reattach it to the saw. Then you simply turn the saw on and make the cut. Woodworkers use this technique to make highly detailed artwork out of wood like landscapes and portraits.

You should consider buying a scroll saw if you're going to make small projects to sell at craft shows or on a site like Etsy. You'll be able to make artwork, jewelry and so much more. Most scroll saws can cut material up to about 1-½" thick, which is all you need for the majority of craft projects.

Reasons to Choose a Bandsaw

The scroll saw is a versatile tool, but it can't do everything. Sure, it's the right saw for small pieces with super-tight curves. But the bandsaw is your best friend when you need an all-around workhorse for a variety of cuts in thick materials.

There are several different types of bandsaws, and each type is designed to do certain things better than others.

Benchtop bandsaws are small and portable. They're meant for contractors who bring them along to jobsites and for woodworkers who don't have room for a bigger tool. Despite their size, benchtop bandsaws are quite capable. You can cut big curves in plywood or solid wood, make rip cuts in thick hardwoods and do almost anything a bigger saw can do. Just make sure to get a high-quality saw made for serious hobbyists or professionals. You'll learn how to select a good tool in a moment.

Stationary bandsaws have bigger motors than benchtop models, so they outperform the smaller saws when cutting thick, hard materials like oak, hickory and pecan. They also accept wider blades, which means they can produce smoother and straighter cuts. Wide blades aren't good for tight curves, but they're excellent for rip cuts.

You might want to rip material on the bandsaw when it's bowed, curved or warped. It's much safer to cut a warped board on the bandsaw than on the tablesaw because there's no chance of kickback. Many woodworkers start their projects by cutting their rough lumber slightly oversized on the bandsaw before jointing and planing. After they've planed two faces and jointed an edge, they'll move to the table saw to cut everything to final size.

Many bandsaws are equipped with fences that aid in rip cutting. You'll also find a variety of jigs for cutting arches, circles and other shapes.

Resaw bandsaws are generally big, powerful tools that are designed for slicing thick boards into thin veneers. These saws have strong motors, wide blades and are really good at making straight cuts. Instrument makers use resaw bandsaws to cut thin veneers from solid wood to create the sound boards and backs for guitars, violins and other musical instruments.

Big resaw bandsaws can also cut curves, but when fitted with wide blades, they're limited to large arcs. You can usually attach a smaller blade, but if you think you'll be using small blades often, you're probably better off getting a different bandsaw that's made for curves, not resawing.

Best Scroll Saw for the Money

Now that you know the difference between the scroll saw and bandsaw, you can choose the type of tool you really need. If you've decided on a scroll saw, here's how to select a good one.

It's important to know whether you'll use your new saw once every couple of months or every day. You can get an inexpensive saw that works just fine for occasional use, but you'll have to spend more on something that will need to withstand daily operation.

For the occasional hobbyist, brands like Craftsman, Skil and Ryobi are just fine. These tools usually have plastic bodies, metal tables and light-duty motors. Expect to spend up to $200 on a good hobby scroll saw of this kind. One model to consider is the Rikon 16 VS scroll saw It features a tilting table, plastic blade guard and work light for around $199 online.

If you plan to use your scroll saw on a daily basis, you might want to look at tools from Delta, DeWalt or Jet. A good saw from one of these manufacturers can cost somewhere between $400 and $1000, depending on features like tool-free blade clamps, stand, dust blower and blade speed. DeWalt's DW788 is a great starter saw for about $480. It has variable speed so you can adjust the blade for the material you're cutting, plus a flexible dust blower and tool-free blade clamps. You can add a stand for another $70 or so.

Best Band Saw for the Money

Because there are different types of bandsaws, the best saw for you will depend on your needs. If you've decided on a benchtop saw, Rikon's 10-305 is a good choice. It's an excellent general-purpose saw for ripping, cutting curves and even resawing material up to 4-⅝" wide. It has a tilting steel table, rip-fence and ⅓ horsepower motor, features you should look for in any good benchtop saw. This tool should set you back about $280-$300.

Decent stationary bandsaws run anywhere from $750 to $1500 or more. You want a heavy saw to reduce vibration and a powerful motor. Look for something with 1-¼ horsepower or more, multiple speeds and a lot of resaw capacity (12" or so). Jet's 14" Deluxe Pro Bandsaw, Model JWBS-14DXPRO, is a great option. It has all of these features, and you should be able to find it for about $1000.

If you're looking for a lower-priced saw to get started, consider the JET 708115K. It's another 14" saw with tilting table, although it has a smaller motor (1HP) and single blade speed. You can pick up one of these saws for about $750.

Bandsaw or Scroll Saw: Do You Need Just One?

It's possible that you may need both a scroll saw and bandsaw. You won't be able to cut super-tight curves with a bandsaw, and a scroll saw can't make straight rip cuts in thick stock.

Many woodworkers have both tools. But, if your budget or workspace won't accommodate two saws, you'll have to decide what capabilities you need most.

For craft projects, artwork and small workpieces, get yourself a good scroll saw. If you'll be building furniture, molding, cabinets or doing home improvements, buy a bandsaw.