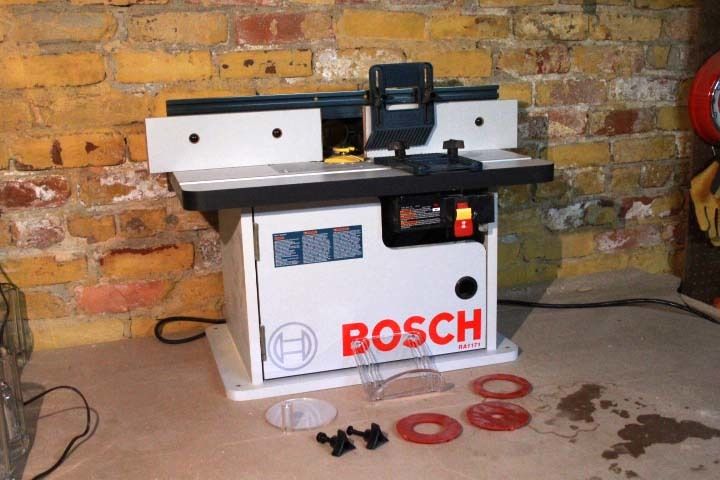 I opened my door this morning to find a package from Amazon. Imagine my delight when I found the Bosch RA1171 Router Table inside.

In this post we are going to open up the table, put it together and I'll let you know what I think.

If you read TimberAndTools.com often, you'll know that I am a big fan of the added functionality a router table provides. For the longest time, I hung my router upside down from a piece of oak on my table saw. This was workable, but I was tired of battling my 2"x4" fence system (referring to it as a fence system is the overstatement of the century) and I really wanted a miter slot so that I could introduce both feather boards and jigs into my routing arsenal.

Why I Chose the Bosch Cabinet Style Router Table

My decision was based on 3 constraints. First, my shop space is tiny. I have about 250 square feet of space in my basement, so a standalone table was out of the question. Second, dust is a huge issue for me. ​I wanted something with a cabinet to contain as much dust as possible. Finally, my budget is limited. I had at most $200 to spend.

Not long ago, back when I was daydreaming about a new router table, I wrote a post that documented the research I was doing to find the right table for myself. From that work, I knew I would be deciding between two options: The Bosch RA1171 or the Benchdog Pro Top. The Benchdog was enticing but ultimately I couldn't justify stretching above the $200 I had to spend, especially when the Bosch RA1171 was available for half the price. One additional factor that did come into play was the fact that the Bosch router table had a dust collection port in the cabinet, again dust is a HUGE deal for me.

What's In the Video

In the video above I show you exactly what comes in the RA1171 box and how to assemble it. I sped up the video during assembly, so it is a bit difficult to tell how long it actually took me. ​In total, I had between 30-45 minutes invested in getting the thing screwed together. It was extremely easy to put together. If you put a piece of it together incorrectly, you will know immediately - in fact, Bosch engineered the assembly to self-identify mistakes.